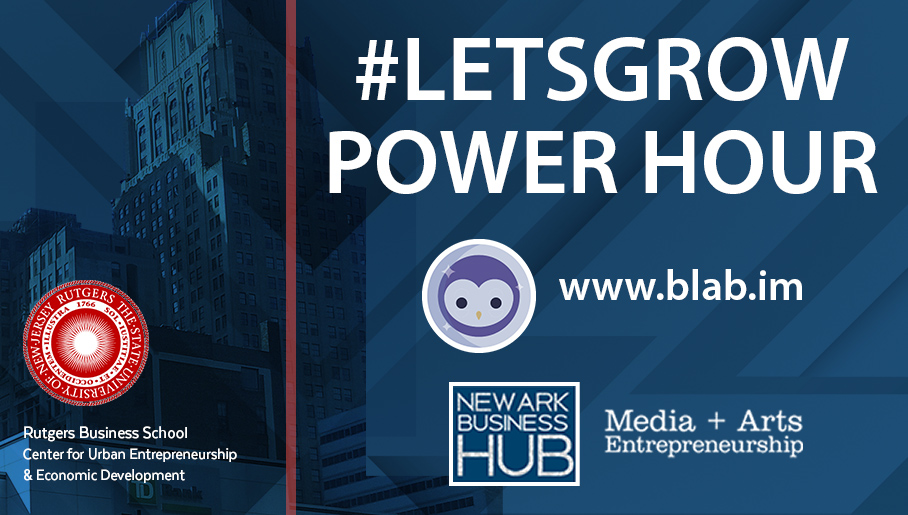 #LetsGrow Power Hour on Blab offers encouragement, conversation, and access to the resources and people that will exponentially grow your business, your brand and you.
‪#‎NewarkBusinessHub‬ ‪#‎knowledgeISPower‬ 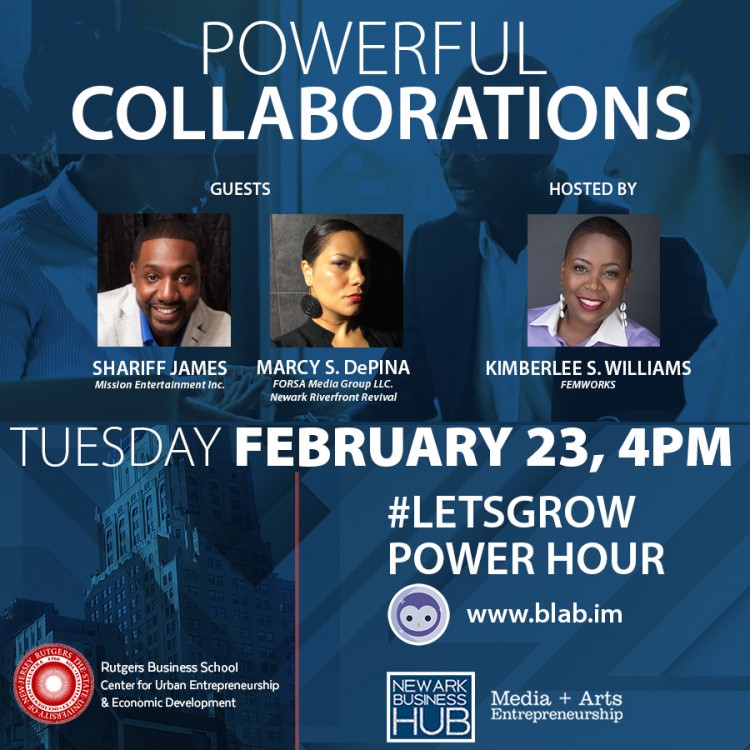 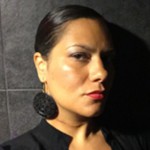 Marcy S. DePina has spent the last 16 years cultivating a career in marketing, social media, event, film and radio production. Ms. DePina received her Bachelor’s degree from Rutgers University in Music and Latin American Studies and has focused her career on niche markets including African and African diaspora, Portuguese and Spanish speaking communities. As a former marketing director of the Wall Street Journal, she honed her skills in the corporate arena before branching out on her own to start FORSA Media Group LLC, a multi-media company that specializes in event and film production, branding, social media, artist management and consultation. In her role at FORSA Media Group she has worked with the Kingdom of Morocco, the United Nations, 92YTribeca, SOBs, New Jersey Performing Arts Center, Afropop Worldwide, Kriol Jazz Festival in Cabo Verde, Ebru TV, Caribbean Fashion Week in Jamaica, GrassROOTS Community Foundation, Festival Transamazoniennes in French Guiana, The Root, and Central Park’s SummerStage. She is the former host of a weekly radio program “The Movement: Cabo Verdean Vibes” on Caribbean Zone 105.7fm and the scriptwriter, host, and voice over talent for the multi-Emmy award winning program “Rhythm & Roots” on Ebru TV. Ms. DePina’s innovative approach to events brings together dynamic cultural expressions with audiences to foster understanding and connection through the medium of art. She was named Program Director for Newark Riverfront Revival in October 2015 and brings her business savvy and event production skills to the Riverfront by building on existing programming and continuing to diversify events to fulfill the mission of bring every Newarker to the riverfront. A speaker of four languages, Ms. DePina is originally from New Bedford, Massachusetts and has been a resident of Newark, New Jersey for the last 22 years where she lives with her son. 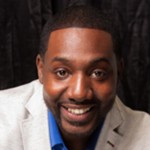 Born and raised in urban Essex County New Jersey, Shariff A. James is a prime example of how personal resilience, and determination can lead to entrepreneurial success. Mr. James has persevered through very difficult circumstances and has grown into a naturally courageous and capable business leader. Furthermore, he uses his ideas, talents and strengths to create movements that bring a nationwide positive audience together for huge events.

In 1998, Mr. James founded Mission Entertainment, Inc., now a statewide upscale leisure and entertainment company that produces quality events for the young working class audience. He has mobilized tens of thousands of people from diverse backgrounds in support of Mission programs and ventures. The success of Mission results from Mr. James’ charm, positive personality, and infectious humor, along with the ability to plan strategically, remain persistent, lead effectively, and inspire others to participate in a common vision.

From the moment you meet Shariff, it’s easy to see why Mission Entertainment (“Mission”) is now one of nations premiere sources of entertainment for young urban professionals. Shariff A. James, Founder and CEO of Mission Entertainment, with over 150 + successful events, over 3,500 patrons in attendance, Mr. James has elevated Mission as a force to be reckoned with. He and his team continues to move Mission into the forefront as he recognizes the need of the young working class audience and is committed to planning and promoting events that reflect the level of entertainment his audience expects and deserves. This has led to the success of Mission; and since 1998, Shariff continues to satisfy his customers and take the entertainment industry by storm. Throughout the years he has gained the respect of his customers and community as being an effective producer and leader, capable of planning and implementing-events-successfully.

As a successful executive, life coach, and mentor, Mr. James also encourages others to live their dreams. Mr. James has a strong passion for speaking and teaching others valuable lesson he learned on his journey. His signature warm, caring, and humorous style, has attracts likeminded people which represents and built his positive movement.

In addition to being a devoted husband and father of two, over 10 years Mr. James is active mentor and speaker at the University of Medicine and Dentistry of New Jersey Young Fathers program and was awarded the Young Fathers Appreciation award in 2007. He has also participated in numerous conferences and panel discussions on family related topics for local community institutions such as Family Intervention Services. Mr. James is a 2002 graduate of the Prudential Young Entrepreneurial Program, and a recipient of the J.O.B. Marketing and Travel Sales Achievement Award and the Mission Man of Achievement Award among others. He also has been a feature Entrepreneur is a new book Young Gifted and talented.